Emu oil is a chemical derived from a kind of bird commonly found in Australia. Touted as one of nature's best inflammatory agents, research has shown that emu oil is rich in lineolic acid and can have positive effects on various kinds of skin, hair and scalp disorders.

According to clinical studies in Australia and the U.S, emu oil is an excellent anti-inflammatory agent that can rejuvenate skin cells and produce up to 80% in healthy hair growth. Specifically, emu oil can penetrate tissue cells faster and more effectively than most other mechanisms.

The potential benefits of emu oil are numerous, it can be used to treat arthritis, wrinkles, hair and scalp disorders and other skin disorders such as Psoriasis and Eczema etc.

Consumers should be careful not to confuse Emu oil as an agent that can grow hair. To the best of our knowledge, Emu oil has not been clinically tested to its effectiveness in slowing down male pattern baldness or promoting hair growth. It appears that most testings conducted in Australia and the US only confirm Emu oil's effectiveness in promoting healthy growth of existing hair. We do agree that the anti-inflammatory properties of Emu oil can greatly assist people with hair loss resulting from various scalp problems. In fact, some doctors agree that inflammation of the scalp and hair follicles (due to various reasons) is one of the major cause of hair loss. Given Emu oil's natural anti-inflammatory properties, it may be a great alternative to drug-based anti-inflammatory shampoo such as Nizarol etc.

⇒ At Auburn University, clinical studies showed that Emu Oil can be used as a transdermal carrier and is 20 times more effective at penetrating the stratum corneum, or "skin barrier," than mineral oil.

⇒ At the Boston University Medical Center , Michael Holick and his research team confirmed numerous beneficial properties of Emu Oil, including the promotion and acceleration of skin cell regeneration and even the stimulation of hair growth.

SUMMARY: When compared with human skin oil, the fatty acid composition of emu oil is found to be quite similar. In both types of oil, mono-unsaturated oleic acid is the most prevalent fatty acid, followed by palmitic acid, then linoleic acid, which is an EFA (essential fatty acid). This similarity may be one of the factors enabling emu oil to have such a positive action on human skin.

⇒ More and more companies are now conducting research using Emu oil, eg: Delta West Pharmaceuticals, Orion Laboratories, and even the American Cancer Institute where Emu Oil is being studied for its effects on the immune system and tumor biology at the cellular level.

SUMMARY: Analysis of fatty acids in emu oil reveals that it contains approximately 70 % unsaturated fatty acids. The major fatty acid found in emu oil is oleic acid, which is mono- unsaturated and which comprises over 40 % of the total fatty acid content. Emu oil also contains both of the two essential fatty acids (EFA's) which are important to human health: 20 % linoleic, and 1 - 2 % alpha-linolenic acid.

⇒ Emu Oil: Comedogenicity Testing. (Study done for E.R.I., 1993)
By: Department of Dermatology, at University of Texas Medical School, Houston.
SUMMARY: Testing using the rabbit ear histological assay, with emu oil in concentrations of 25 %, 75 % and 100 % shows that emu oil in concentrations of up to 100 % is non-comedogenic, i.e. it does not clog the pores of the skin.

⇒ Moisturizing and Cosmetic Properties of Emu Oil: A Double Blind Study (1994).
By: Dr. Alexander Zemtsov, Indiana University School of Medicine: Dr. Monica Gaddis, Ball Memorial Hospital; and Dr. Victor Montalvo-Lugo, Ball Memorial Hospital. (Reprinted from AEA News, October/November 1994 issue)
SUMMARY: Eleven human subjects took part in a double-blind clinical study which compared emu oil with mineral oil in texture, skin permeability and moisturizing properties, as well as comedogenicity and irritability to the skin. No irritation to the skin was observed with either oil. However, comedogenicity of emu oil was significantly lower than that of mineral oil, and all subjects stated a unanimous preference for emu oil.

SUMMARY: A combination of emu oil with a suitable transdermal transporter is found to show anti-inflammatory (anti-rheumatic) activity in various rat models.

Research conducted at the Occupational Dermatology Laboratory of the University of Texas Medical School at Houston concluded that emu oil consists mostly of oleic acid, a mono-unsaturated fatty acid. The oil is highly penetrating and won't clog pores. It can help people whose skin is parched, cracked and has lost its smooth, healthy look. Beauty professionals across the country are touting the benefits of emu oil. Found in numerous cosmetics, soaps and shampoos, it has been reported that the oil also thickens aged, mature skin, making it appear younger. One study reported that 100 percent emu oil rubbed into the skin twice daily would thicken the skin by 14 percent.

"The general "anti-aging" properties of Emu Oil was examined at the Boston University School of Medicine.

In this double-blind study, a refined Emu Oil known as Kalaya (New World Technology; Los Angeles, Calif.) was topically-administered daily to depilated mice, over a two-week time-period. Corn oil was utilized as the negative control substance. Results demonstrated that the refined Emu Oil produced a 20% increase in the overall rate of DNA synthesis within the skin cells of these animals, whereas the rate of DNA synthesis within the negative control animals remained normal. A marked increase in the overall thickness of the skin, to which the Emu Oil had been applied, was also found. In addition, over 80% of hair follicles which were quiescent at the time of the initiation of the study, were stimulated by the application of the Emu Oil and began to produce a viable hair shaft. Typically, hair follicles go through stages from a quiescent phase, to an active hair-growth phase, and back to the quiescent phase again. The administration of Emu Oil was found to not only stimulate the hair follicles into the active phase, but it kept them in this phase during the entire period of administration, as well."

Side effects: Emu oil is very well tolerated by most individuals. Few known side effects.

Topical application: Use topically as required or directed by physician. Emu oil can also be used as an excellent transdermal vehicle for those who wish to compound their own hair regrowth formula.

Emu Oil as an Effective Treatment for Hair Loss

Emu oil may slow down the progression of hair loss or stimulate small amount of hair regrowth at best. It is unlikely Emu Oil alone can effective treat hair loss.

If you are looking for a more effective hair loss treatment, look into hair transplant procedure. Hair transplant is presently the only treatment that can give you reasonable coverage of your own natural growing hair.

Contact Hasson & Wong and see if you are a good candidate for hair transplant procedure. Hasson & Wong has been a sponsor of HairSite for over 10 years with 13+ years of uninterrupted patient records in our open forum community.

See below for one of Hasson & Wong hair transplant transformations. 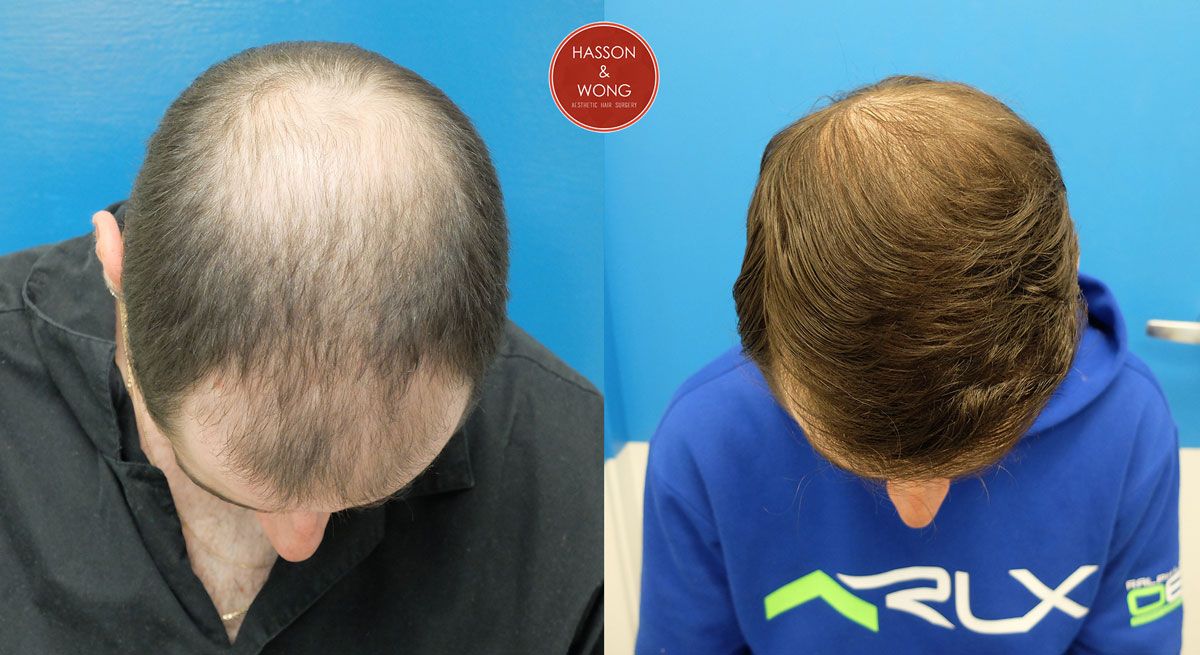 Click one of the buttons below to learn more about hair restoration procedures at Hasson & Wong hair clinic.

FREE no cost and in-person consultation monthly in a city near you across US and Canada.