* The hairline advancement/lowering procedure can lower the overly high hairline whether due to genetics, hair loss, or prior surgery such as browlifts. Most commonly it is performed on women, where the high forehead can be shortened. In addition, it is possible to actually change the shape of the hairline, making it more oval or rounded by filling in the upper temporal/side regions, creating a more feminine appearance. This is a procedure in which Dr. Epstein specializes, performing them on average two to three times weekly, mostly on patients who travel in for the procedure.

There are two techniques that can be used to advance the hairline. The most common, because it has many advantages, is with hair transplants. In this technique, as many as 2400 or more hair grafts can be placed in a single procedure with natural appearing results. Performed usually under a mild oral sedative, this four to six hour procedure is essentially painless, as is the recovery period. These grafts, each containing one to three hairs, are placed in the natural direction of growth, into very tiny incisions both in front of as well as between the existing hairline hairs in order to increase density. Most patients are fully presentable by three to four days with a hat or scarf, and allowed to resume normal activities, including exercise and hair washing, at five days. The transplanted hairs fall out after three weeks, then start to regrow at four months- requiring a total of eight or so months before the results are quite noticeable. The hairs can grow not only in areas that once had hair, but also in areas where hair never grew. The donor hairs come from the back of the scalp, which continue to grow for a lifetime. To provide a natural appearance, the hairs are transplanted primarily one and two at a time, with the finest hairs up front, the natural way the hairline hairs grow. There are few risks with the procedure. The donor site, from where the hairs are removed, typically heals as a less than 2 mm wide incision, easily concealable with existing hair in the area.

The other hairline advancement technique is a surgical procedure that involves shortening the forehead while surgically moving the hairline forward. An incision is made right along the front of the hairline, and sometimes along with shortening the forehead, the eyebrows can be raised up, if desired, so that a browlift is performed. The result is a fine line incision scar along the hairline which typically heals up to be barely if at all visible, plus is typically designed by Dr. Epstein to have hairs growing through it. This is definitely a bigger procedure than transplanting with hair grafts, but can be quite effective and produce rapid results. Most patients are presentable at five to seven days, and the sutures come out at around a week. 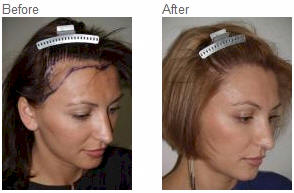 Other News from the
Foundation for Hair Restoration 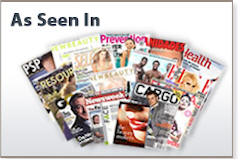 *reprint with permission from Dr. Epstein