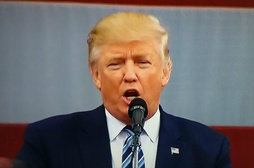 United States President Donald Trump is all about controversies whether it be polictics or business but nothing has generated as much controvery as his hair. Trump hair mystery is the source of relentless speculation even before he became president of the United States. The media and the general public have never eased their obsession with Trump hair mystery over the years. The never ending obsession speculates whether Trump hair is real, is he wearing a hairpiece,  did he have work done, what kind of work etc etc.

The surface of a recent video of Trump boarding Air Force One has social media going wild on Trump hair mystery frenzy. The recent video shows Trump hair caught in the wind while boarding Air Force one and exposed what some people believe to be a large bald patch in the back of his head. To some people, this video is more important than Trump's tax cuts and foreign policy.

So does this video really solve Trump hair mystery once and for all or actually fueling more specualtion? Some speculate that Trump's hairpiece was blown in the air while boarding the aircraft. Others speculate that Trump might have hair flap surgery done in the past. We all know what a hairpiece is but a lot of us actually have no clue what exactly is hair flap surgery.

Because hair flap surgery involves removing a large patch of hair bearing skin from the back of the patient's head, the patient is usually left with a large bald spot in the back of his head after the procedure.

So there you have it. Hair flap surgery is a possible explanation of why you see what appears to be a large bald patch in the back of Trump's head in the video.  Does the video look like Trump had hair flap surgery done? You be the judge.

Hair Flap Surgery: It Can be Fixed

If Trump hair mystery is indeed the result of a hair flap surgery from many years ago, there is a remedy for that. Nobody needs to live with unsightly hair transplant scars these days. Repair sessions with an experienced hair transplant doctor using body or beard grafts donor can restore some normalcy for most badly scarred hair transplant patients.

For an expert opinion about Trump hair mystery or to learn more about  hair transplant or hair transplant repair, contact Dr. Umar for a FREE no cost consultation at (310) 318-1500 (US) or  email: drumar@dru.com or visit www.dru.com . Dr. Umar is presently the Top Ranked body hair transplant megasession doctor on HairSite according to our patient result statistics.

Below is one of the many extreme hair transplant repair success stories at Dr. U's clinic