Since the demise of Intercytex and Aderans, Histogen has now become one of our community's primary focus with respect to advanced research in non invasive cell based hair regrowth treatment.

Histogen Inc. is a US company founded in 2007. It was incorporated in the state of Delaware. At the time when this is published, Histogen's head office, clinical and research facility are located in San Diego, California.

The core focus of Histogen is on the research, development and commercialization of regenerative produces using the company's proprietary technologies. According to Histogen, their technology aims to mimic the patient's embryonic environment in order to encourage "newborn cells to naturally produce vital proteins and growth factors that are characteristic of young, rapidly developing tissue, and which can stimulate stem cells in the patient's own body to regenerate new tissue".

Histogen was founded by Dr. Gail Naughton who currently serves as CEO and Chairman of the Board. Dr. Naughton holds numerous US and foreign patents and has an impressive background with more than 25 years in tissue engineering research.

One of Histogen's applications that has been followed closely by our community lately is HSC - Hair Stimulating Complex.

From what we understand, HSC is a cell based injectable treatment for hair loss which comprises of special proteins such as KGF, VEGF, and follistatin. According to Histogen, these proteins "are involved in signaling stem cells in the body, and have been shown to be key in hair formation and the stimulation of resting hair follicles. Follistatin in particular has been linked to hair follicle stem cell proliferation."

KGF stands for Keratinocyte Growth Factor and some studies have suggested that KGF may play a role in signalling the formation of hair follicles. In particular, a study conducted by the Department of Biochemistry, Inha University College of Medicine, Incheon 400-712, Korea shows that certain administration of recombinant human KGF-2 (rhKGF-2) may significantly stimulate human hair-follicle cell proliferation in organ culture and concluded that rhKGF-2 can be a promising therapeutic agent to stimulate human hair growth.

Follistatin is a binding protein and it has been shown that when combined with wnt and other factors, it can have positive effect on hair growth.

At the time when this article is published, Histogen has already completed two self sponsored clinical trials with the primary goals of establishing the safety and efficacy of the experimental treatment.

The two trials concluded that the treatment has a strong safety profile and as for efficacy of the treatment, a 73+% increase from baseline was reported after 1 year while the control group shows a 15% decrease.

In addition, it is reported that the treatment seems to have a positive effect on female hair loss as well. 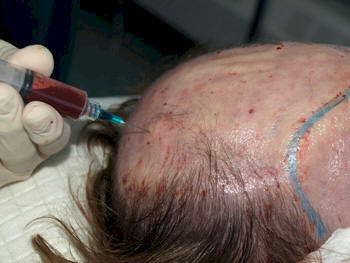 
Contact us if you wish to participate as a test subject in the latest trials and experiments in hair restoration. Many are offered to eligible candidates free of charge. Email us for details:
hairsite@gmail.com

Archives and earlier coverage on hair multiplication research, a chronicle of the relentless attempts by countless clinics and organizations in the pursuit for the holy grail in hair regeneration.