Auto-transplantation of hair normally provides satisfactory correction of baldness and hair loss. In a normal hair transplant redistribution of hair follicles from one part to another occurs in the same individual.

Reported for the first time in 1999 that the human follicle cells can be induced to grow in an incompatible host of the other sex. With these recent advances in follicle cell transplants in incompatible hosts we considered it necessary to evaluate an allogenic hair transplant. We wanted to determine whether the allotransplant is successful or not. If it is not successful the reasons behind it and how to overcome the obstacles.

Objective: We performed an allo-transplant in two unrelated individuals. We observed the growth of hair in the incompatible hosts over a period of 14 months.

We provided each of the subjects pre-op medications and an area of scalp measuring 6x1cm was shaved and anesthetized. Then the skin with the hair follicles were removed. The hair grafts were cut into smaller single, double and triple grafts. In the first operation 586 grafts of AA were transplanted on FA and in the second operation 594 grafts of FA were transplanted on AA.

Pictures were taken at different intervals to monitor growth.

• Grafting was done on temple areas for better visibility 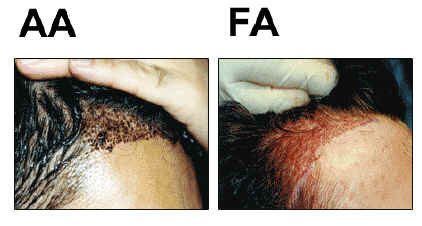 Post surgery growth was measured at 9 months and 14 months. At 9 months on FA 45 of 586 grafts were counted as surviving grafts.

Conclusion: This study shows that allo-hair transplants do not work in the traditional format. Even though the dermal sheath of the follicle is immuneprivileged the tissue surrounding the graft does not have the same properties. Therefore there is no survival of the graft.

It will be necessary to introduce modifications to the way the grafting is done to remove the non immune-privileged elements that surround the dermal sheath of the follicle. We hypothesize that if skin antigenicity can be limited this can present a new approach to the treatment of hair loss.

The above is provided by courtesy of Alvi Armani